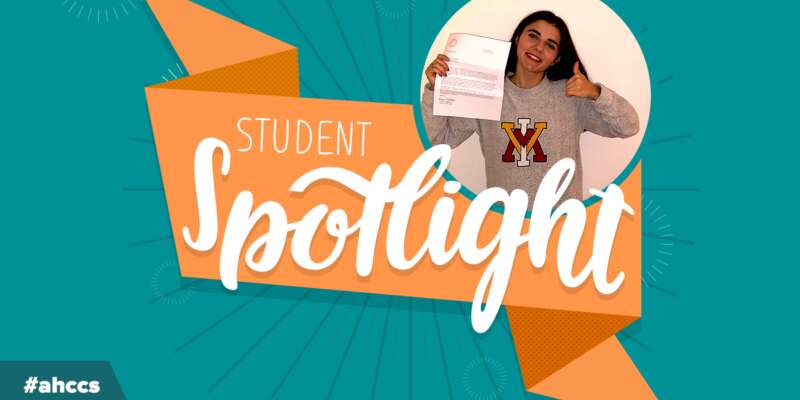 Competitive dancing has always been a passion of 12th grader Angeline Castagna. Coming to AHCCS in 9th grade because she was taking 13 dance classes a week and averaging a total of 17 hours a week in her studio, Angeline discovered the flexibility a cyber school offered. While some only saw her as a dancer, however, she discovered another passion that would eventually lead her to Virginia Military Institute (VMI). Angeline has recently been accepted into VMI’s ROTC Air Force program and is ready to start her new military lifestyle. Despite being a far from ordinary college experience, Angeline proves that she fits the mold.

Ever since 9th grade, VMI has been my dream school and I realized pretty early that it was where I wanted to go, but I had people tell me I wasn’t going to do it,” Angeline said. “They thought that just because I was a dancer, I wasn’t going to go to a military school and even questioned whether or not I was aware that VMI was a military institute. Most of them realized how much I wanted to do this after talking with me for a while, but it was nice to prove those people wrong who didn’t take me seriously at first.

Angeline first discovered VMI after a 6th grade teacher sparked her interest in the American Civil War. She was particularly fascinated by Thomas “Stonewall” Jackson, who not only fought in the War but would later become a professor at VMI. VMI’s application process is extensive, requesting an 1100 SAT score, a minimum of 20 academic units, above a 3.0 GPA, several extracurricular achievements, and even more charter recommendations. When the time came for Angeline to start exploring colleges, VMI was always in the back of her mind.

I was fortunate enough to meet with the Admissions Office and get a provisional appointment to VMI before my junior year,” Angeline said. “What helped me was being aware of all the due dates while staying on top of my school work, keeping up with my extracurricular activities, and volunteering at my local food pantry and a teens helping teens program. The smaller student population is going to allow me to have closer connections with my professors and a stronger academic focus, since the coursework is rigorous and demanding. I believe VMI is the best place for me to get an education.

Cadets at VMI are required to do 4 years of an ROTC program of their choice in one branch of military. After graduation, they can either become regular civilians again or go on and seek a commission from the branch they chose. While Angeline would really like to commission into the United States Air Force after graduation, her bigger goal is to become a commercial pilot. Since these certifications aren’t offered directly through VMI, Angeline is prepared to obtain these on her own.

While I would love to commission and serve in the Air Force, I am going to wait and see what is best for me upon graduation,” Angeline says. “Since I do hope to seek a commission right now, I am currently looking for flight lessons to get my private pilot’s license, which would allow me to become a commercial pilot regardless if I seek commission or not. I will have to do this while I am home from school on breaks or before I attend VMI. There’s always the option to obtain it after graduation, but I am excited to get started.

Angeline explains that this process has also allowed her to have stronger organization skills and a sense of focus. She feels that Achievement House helped prepare her for this future she now looks forward to because of all her teachers’ support and their desire to see her succeed. Through classes like Your Path to College and Career Readiness, she has learned the importance of taking her future seriously as well as setting her mind on accomplishing what she wants.

I would advise anyone who wants to accomplish what I have to set their goals, and once they set them, they need to do everything they can to obtain them and keep going for more,” Angeline says. “When I questioned how well I’d do in cyber school, I had teachers like Mr. Williamson who were there to spend 3 hours helping me with one assignment and encouraging me to be the best I could be. When I questioned whether I would be physically fit enough to attend VMI, I started going to the gym and worked my way up to lifting 6-pound weights to bench pressing. It was about setting goals and working towards them every week. More importantly, it was about not letting anyone stand in front of me or tell me that I couldn’t do something.