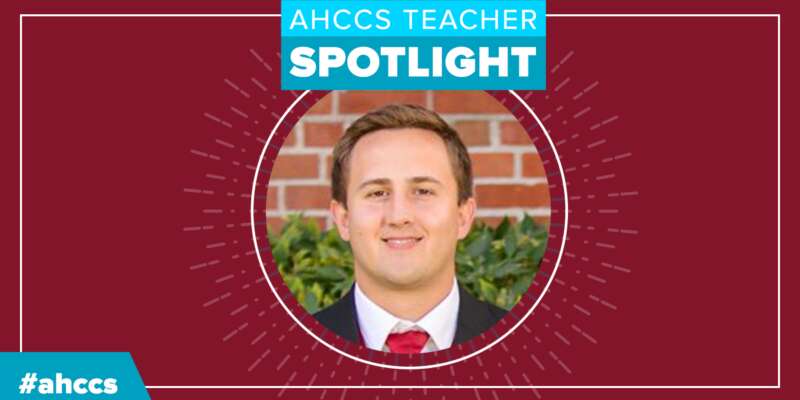 Mr. Andrew Guy: A Jack of all Trades

Having a support system from peer groups is an invaluable way for students to know that they are not alone. It allows students to collaborate with each other and encourage one another to step outside their comfort zone. This is exactly what National Honors Society (NHS) Facilitator Mr. Andrew Guy witnesses when working with his NHS students. Mr. Guy teaches all the social studies core classes for 9th-12th graders, such as civics, career modern world history, and United States history. When he’s not talking politics, he is helping students reach their full potential.

I believe the best part about NHS is the students’ ability to bounce ideas off each other and motivate one other,” Mr. Guy says. “I just had two students apply to the college scholarship program offered through NHS, and one of the students was really on the fence about it. When I connected the student who was fully committed to applying with the one who was doubting herself, they were able to help each other through the application process, and now they’re both waiting to hear back from the program. It’s great to see students inspiring one another to follow through with things.

Mr. Guy feels lucky to have the opportunity to learn more about his NHS students outside their 30-minute live class times. Just like working with the two students who applied for college scholarships, he gets to know them very well, both on a personal and academical level. His main role as NHS Facilitator, however, is helping students put their ideas into action. NHS students have opportunities to come up with service project ideas, such as their existing letter writing campaign for military veterans and individuals who are currently deployed.

The letter campaign was an idea that came from one of our students, and the NHS group decided together that they could narrow it down to a specific demographic such as the military,” Mr. Guy says. “While there are times that I propose ideas and give them project suggestions, most of the time they are the ones coming up with the ideas and I simply help make those visions happen. The next action item they’re hoping to facilitate is a peer to peer tutoring program, which I think would be really special.

Being in NHS is a wonderful accomplishment that students can list on their resumes, and they even receive a special certificate and medal at graduation to show their participation in the group. Last year’s Valedictorian just happened to be an NHS student that Mr. Guy got to work with all year long, and he shares how special it was for him hearing her give the speech at graduation.

Seeing her and actually hearing about her life experiences and hardships that she had to go through to get to that point really moved me,” Mr. Guy says. “This school helped this girl go forward and now she's going on to college. It sounded like if she hadn’t come here that wouldn’t have happened, and I’m so happy I got to be a part of that.

Not only does Mr. Guy have an interest in community service, he also has a love for technology. Being able to merge this with his passion for teaching was what brought Mr. Guy to AHCCS two and a half years ago. Most of the technology AHCCS uses is something Mr. Guy was already familiar with after a student teaching apprenticeship and his previous job as a long-term sub at Conestoga High School, but he has learned that there’s so many new and exciting discoveries to still be made. Mr. Guy had the chance to attend the Microsoft Education Summit in the Baltimore area this past November. The conference was about Microsoft's computer programs that are education focused and how schools can use them.

My biggest takeaway from the conference is figuring out how we can use Immersive Reader, a feature of Microsoft’s One Note program, to help our students with reading skills,” Mr. Guy says. “It can read text back to you in layman terms if it’s too advanced for someone, and even show you a picture of a word if you hover over it. This could be so beneficial for our ESL students as well to hear what words should sound like.

Thank you, Mr. Guy, for all you do for our school and your desire to keep learning, whether you’re the student or the teacher! Andrew wants everyone to know how important it is to have big ambitions and always do your best. And remember, social studies rocks!