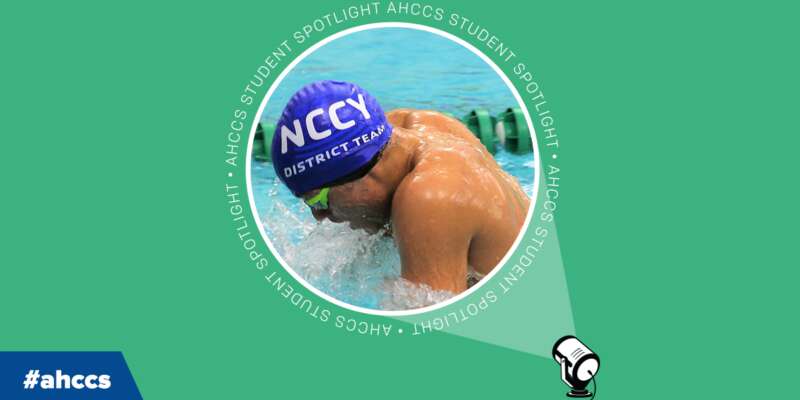 Swimming His Way to Higher Education

AHCCS 12th grader, Zachary Bell, has never seen obstacles as roadblocks. Rather, he sees them as inspiration to prove what he is capable of. Despite being severely asthmatic and having previous doctors tell him that he should quit swimming, Zachary persevered and never took no for an answer.

“People telling me that I can’t do something makes me want to do it more,” Zachary says. “My previous doctor said that my asthma was so bad, that I should quit swimming and it wasn’t the sport for me. I’ve learned though that no matter how hard something gets, you need to keep pushing forward until you reach success.”

Zachary has been a competitive swimmer for 6 years and his dedication to the sport has allowed him to grow as a person, which he credits to always listening to his inner voice and never giving up. He received offers from roughly 40 colleges to swim on their teams beginning this Fall, feeling overwhelmed by their level of interest. He signed a letter of intent with Salem University, however, feeling the most at home here.

“Out of all the other colleges I visited, they felt most like a family,” Zachary says. “After meeting the coach and the rest of the team, I knew that’s where I wanted to go.”

For most of Zachary’s swimming career, he has trained with the New Castle Swim Team where he has access to a doctor that helps him get his breathing under control if his asthma acts up during practice or competitions. Despite having rigorous competitors, he has always showed promise of going far.

“He was in 8th grade and beating their seniors!” Zachary’s mom, Mrs. Julie Bell, says. “During a televised high school districts competition last year, he was swimming the 100-yard freestyle and when coming to the last 25 yards, he had an asthma attack. The amazing part was that he still came in the top 4 and made the state competition.”

Zachary has been with Achievement House since 8th grade, where he benefits from having an individualized approach towards his education. Zachary explains that this has made a huge difference in being able to absorb course content because academic success has never come as easy as his athletic success. Mrs. Bell feels that providing the extra assistance Zachary needs without his teachers assuming what he will not be able to complete or learn something has allowed him to reach his full potential.

“Zachary’s teachers get to root of what his specific needs are while encouraging him to speak up, which allows him to do better and better every year,” Mrs. Bell says. “Everyone’s educational needs are different, and Zachary has been provided with one on one attention while being treated like an individual as opposed to just someone in a larger group. It’s given him the confidence and power to believe that he can succeed academically.”

Zachary’s teachers attest to his determined spirit and are confident that he will succeed, such as Ms. Miller, who previously taught Zachary math and continues to help him academically. She explains that swimming has always been an outlet for him since his school work didn’t come as naturally. Despite this, Zachary strives for accuracy and is never afraid to ask questions.

“Zachary does not let anything stop him and does whatever it takes to succeed,” Ms. Miller says. “It’s not easy for him, but he knows it can be done. I’m so proud of how mature he has become over the years and how in tune he is with life in general. These are commendable attributes for any young person, and the interactions I’ve had with him has made me a better teacher.”

Zachary is already thinking about the future and considering his options for after college. He plans to study business at Salem University which will give him the skills he needs to pursue another passion of his, fixing up old diesel trucks. After completing his 4-year degree, he hopes to obtain a diesel mechanics certificate and start his own business. Zachary tells us how keeping his positive mindset will allow him to accomplish this, hoping to inspire other students to follow their own passions.

“You have to work at what you want every day and not give up no matter how many people tell you that you should,” Zachary says. “Just keep moving forward, and you will start seeing success in yourself.”